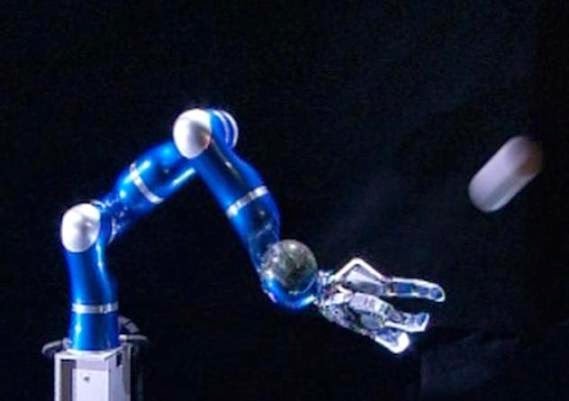 Scientists have developed a new robot arm capable of reacting on the spot and grasping objects with complex shapes and trajectories in less than five-hundredths of a second. With its palm open, the robot stands completely motionless and within a split second it suddenly unwinds and catches all sorts of flying objects thrown in its direction – a tennis racket, a ball, or a bottle.
The arm measures about 1.5 meters long and keeps an upright position. It has three joints and a sophisticated hand with four fingers. It was programmed at the Learning Algorithms and Systems Laboratory (LASA) at Ecole polytechnique federale de Lausanne (EPFL), Switzerland and is designed to test robotic solutions for capturing moving objects. The robot is unique, as it has the ability to catch projectiles of various irregular shapes in less than five hundredths of a second, researchers said.
“Not only do we need machines able to react on the spot, but also to predict the moving object’s dynamics and generate a movement in the opposite direction,” said Billard. The robotic arm already has a very real potential application in space. It has been associated with a project carried out by the Swiss Space Center, which aims to develop technologies for the recovery and disposal of space debris orbiting around Earth. Fitted on a satellite, the arm would have the task of catching flying debris, whose dynamics are only partially known, researchers said.
Also Read  Google Links Inside world - tips and tricks

Are Smartwatches the Future of Wearable Devices?